Once upon over 40 years ago there was a 17 year old girl from Long Island, NY. She was an only child who loved the German language and playing the organ. The only close relative she had was a slightly older cousin named John who lived a couple towns over. When she was 17 she went off to college...got her masters and moved to Wisconsin. After teaching there for a few years she moved to Zion, IL and taught at the high school there. She joined the church to make friends and did the makeup for the Passion Play they put on every year. She had her eye on Pilot and was always afraid to do his makeup because and I quote...'he was fat an sexy'. I guess those two can go together pretty easily on the right person. They ended up getting married and having 3 of the most amazing kids ever.

Those two people are my parents, those three kids are my brothers and I...and that cousin John died this week....and we are all sad. John was a fascinating man who never married. He lived his entire life in the house he came home from the hospital in. He was an engineer and a mason. I don't remember much about him before my grandpa died and that was 20 years ago. I remember he was tall...and took VERY good care of my grandpa who still lived on the Island.

One of my big things I always wanted to do was be able to put flowers on my grandpas grave. He was very special to me....and to this day I miss him. So not long after Skip and I married....we headed to New York for that reason. While we were there we went to see John...spent some time with him. He and Skip got along famously. He told us stories about my grandpa...and my mom. I told him what we were there to do and he thought it was wonderful. But while we were there I took into account how bad the house had become...and how John himself was now almost eye level all 5 feet 2 inches of me because he was so stooped over. And when we came home I explained to my mother who hadn't seen him in many years...that we really needed to do something about him...the house....whatever. A few years later John fell...and ended up in a nursing home for awhile. My mom sent my little brother Paul and I out to see him and try and to do something about the house. We spent the next 4 days shoveling out the place and making it livable for him again. We visited with him for numerous hours and did everything we could to make sure he was comfortable and had a nice place to come home to. I felt horrible about leaving him. My parents and my brothers and I....are literally ALL the family he had left. 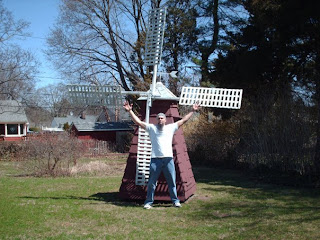 This picture was taken while Paul and I were out there 4 years ago.  John built that windmill when he was about 14.  My brother is over 6 feet tall...that thing is awesome.
Fast forward to 2011. Things are starting to go downhill for him. He's stubborn though....won't do this..won't do that. His legs aren't working anymore and he's back in the hospital. My mother finally gets someone one of the doctors to talk to her and he has stage 4 bone and prostate cancer....and we're out of time. The last time my mother spoke with him was the other day and he was so completely gone she doesn't think he even knew her...after growing up together...and talking on the phone weekly for YEARS...he doesn't know her. The doctor called her in the middle of the night and he had to be put on the ventilator...and he has a do not resuscitate. They take out the tube the next day....his minister was with him..bless that man....and John stops breathing...and goes home.

It's hard you see...when your life is somewhere but you're needed somewhere else. My father hasn't been in a state where he could be left easily for many years....and my mothers first priority is to him....and that's as it should be. And honestly it took John being in a nursing home to allow us to do anything for him so really....there's nothing she could have done differently....even though I'm sure there's guilt on her end....there shouldn't be.

So on Wednesday...I'm heading out East with my parents to lay him to rest. My brothers will meet us the next day. And I'm sad...although relieved that we now know exactly where he is and how well he's taken care of. And my blood on Long Island dries up.

Rest in peace John Walters...and tell my grandpa I love him.
Posted by Claire at 5:31 AM 3 comments:

Claire
I'm a wife and a mother of 3 wild, beautiful children. I'm a runner, gastric bypass patient, occupational medicine specialist, laundry master, speed racer*not a running one mind you* and cook. I'm chronically sleep deprived, antsy, bitchy and always juggling multiple things at once. I'm the best kind of friend to have.....and the one you never forget. 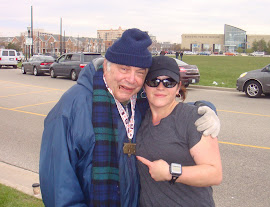 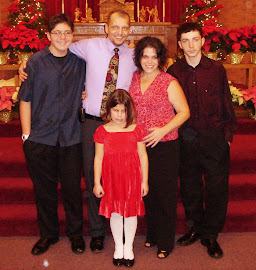